Purchase any of Valery Lloyd-Watts’ recordings for Alfred Music Publishing as well as the Bigler~Lloyd-Watts educational program materials.

Valery Lloyd-Watts’ unique ability to reveal the heart and soul of the music she plays produces an emotional relationship between the piece and the listener. Recordings like Music Meant for You, Music for your Baby, Music for a Better Brain, The Healing Heart of Music, Bringing Music to Life, and Great Movie Themes demonstrate the deep value she places on the power of music to positively influence individuals. 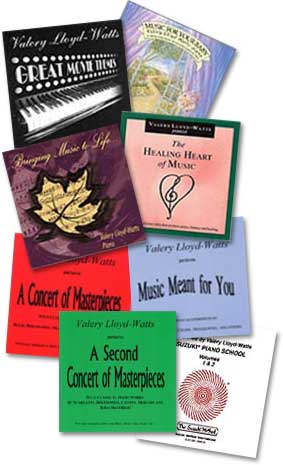 This collection of virtuoso powerhouses and tender masterpieces is a signature Valery Lloyd-Watts recording. Hailed by the American Liszt society as a “first rate musical event, displaying the superb musicianship and pianism of Valery Lloyd-Watts.”
More information…

Music for Your Baby

Valery Lloyd-Watts released this inspirational children’s recording in consonance with the scientific research that states: exposure to classical music improves intelligence. Music for Your Baby is intended to inspire creativity, promote relaxation, and increase intelligence in a child’s early development stages.
More information…

Music for a Better Brain

Scientists have confirmed what great philosophers and teachers have believed for centuries; listening to classical music increases intelligence. On this CD, Valery Lloyd-Watts has chosen a wide variety of music, each a jewel from the great masters. Listening will stimulate, release, and refresh you.

Having deep convictions as to the healing power of music, Valery Lloyd-Watts has chosen a selection of pieces that enhances the mental and physical healing process.
More information…

This is Valery Lloyd-Watts’ first recording with inspiring commentary, in keeping with her belief that listening to classical music enhances human intelligence while promoting spiritual and physical healing.
More information…

Twenty-one of the most loved movie themes have been especially arranged for Valery Lloyd-Watts by composer Clifford Crawley. Each one is unique and yet they combine to create a unified style. They are beautifully played with all of the virtuoso pianism required.
More information…

This collection creates a dazzling concert of six of the most revered classical treasures, including Beethoven’s Moonlight Sonata and Bach’s Italian Concerto.
More information…

Valery Lloyd-Watts’ life long dedication to bringing joy and education to the lives of students through classical music is evident in her masterful recordings. Valery Lloyd-Watts, with Carole L. Bigler, introduced the Bigler~Lloyd-Watts Piano Repertoire (working title: Mastering the Piano)in 2001, using not only the best pieces available in classical music but also selecting those that students love to play. The seven levels of repertoire will be published by the Alfred Publishing Company. Valery Lloyd-Watts has recorded the entire Suzuki Piano Method repertoire at the invitation of the Suzuki Association of the Americas. These masterful recordings are listened to by thousands of students daily and are available through Warner Brothers music.

Additional recordings for the Alfred Music Publishing Co. include:

In 1997, she recorded the Diamond Jubilee Collection of pieces by Canadian composers for the Canadian Federation of Music Teachers’ Associations