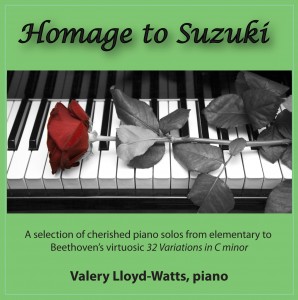 Album Notes
In the early 1960’s Shinichi Suzuki’s revolutionary method of teaching music (called Talent Education) gained recognition in North America and attracted both passionate admirers and detractors. Those who believed in his ideas are now gratified to see how his Mother Tongue Approach as altered, enriched and elevated the teaching of music worldwide.

My music partner Carole L. Bigler and I were on fire with the promise and joy of this radically different way of learning and applied it to our piano teaching. In 1978, w were asked to write our book Studying Suzuki Piano: More Than Music, published in Japan with a foreword by Dr. Suzuki. I was also invited to record the piano repertoire by the piano committee of the newly formed Suzuki Association of the Americas. The Book and recordings, now published by Alfred, are still widely used.

Recently, the Suzuki piano repertoire has been updated with new pieces which are included on this recording.

It is with great gratitude that I offer this recording to the memory of Shinichi Suzuki, as well as to all those who have contributed to the success of Talent Education worldwide.